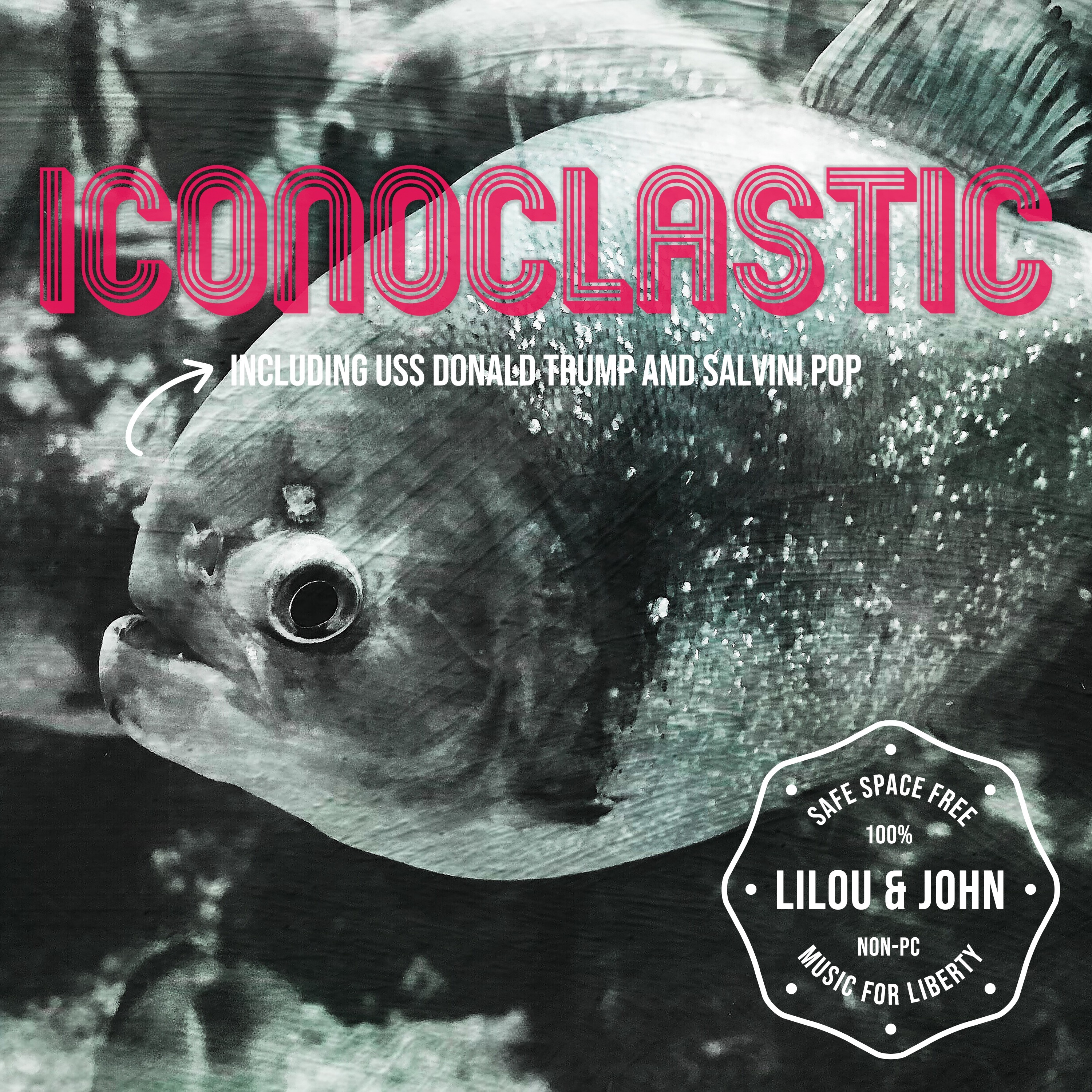 Iconoclastic, Lilou & John’s seventh release and second full length album, was recorded from March to May 2019 as the duo wanted to move from acoustic neofolk to a new genre. They had already been discussing making an EDM album and a transatlantic collaboration was under way. In February 2019, after the breakup of the collaboration, Lilou & John decided to produce their own music from scratch in Garageband.

The album was very well received, by far more than any other album. Svegot’s Magnus Söderman called it “really good straight through”, Ernst Robert Almgren from Maskulint called it “their best album so far” and Joakim “Oskorei” Andersen from Motpol wrote “Lilou & John is a good example that something else, at the same time more intelligent and more fun, is possible.” The album name came from an article written by Brett Stevens where he described Lilou’s voice as “iconoclastic”. “Counter Jihad” originated as a short poem and the theatrical melody added a deep almost Satanic feel to the song. The choirs and rhythm gave it a flare of Grieg’s “In the Hall of the Mountain King”.

“Iconoclastic” is an English version of the Italian classic “Avanti Ragazzi di Buda”. The acoustic version was praised by Svegot’s Dan Eriksson. The song immediately became a hit among fans and Lilou & John decided to make a studio recording after they had received several messages calling for such a version. The music arrangement and vocal style was intended to add a retro feel. It was one of the hardest songs to finish as it took long time to mix the song properly. The name “The White Eagle” was taken from Polish National myths and the tanks refer to the Soviet oppression in central Europe. Lilou & John released it as a “Polish sequel” to Hungarian-themed Free Woman and was just like “Iconoclastic” inspired by Italian classic “Avanti Ragazzi di Buda”. The disco sound in combination with the electric guitars was intended to create an aggressive sound. The song was featured in an interview with Polish news site Narodowcy after the release. “Pasokification” means the decline and dissolvement of Social Democratic parties and their replacement by more radical parties. The reggae melody fit the repetitive rhyming. The trumpets that make up much of the foreground of the song came to life in a hotel room in Gdynia where Lilou & John stayed during the Easter holiday 2018.

I’m a kid of the Y2K generation
I dive into everything without hesitation
My color is many, my imagination
Sets the limits for the manifestation
Of God my personal interpretation
Of why we have this indoctrination

I’m a creature born without creation
Born into this new world alienation
Denied my right as a child of the nation
Knowledge, freedom and explanation
Sentenced to this long stagnation
Propaganda called education

I will stop this social medication
This linguistic social liquidation
This Stand-in-line-and-wait-for-information
This White and Black, Hispanic Asian
Voting for gentrification
Tyranny and mass migration “Bolsomito” started as a short nursery rhyme about a jaguar stalking its prey in the jungle. Lilou & John had decided to make a song about the Brazilian president Jair Bolsonaro. During the recording process it was clear after having tried many different singing techniques that the whispering “jungle” sound matched the song best. During the mixing, however, they discovered that the vocal track was littered with background noise from the mic. It risked lowering the quality of the recording so they decided to turn the noise into an instrument. The noise was amplified, reverb was added and the noice was cut into short rhythm sections like a scratchy jazz hi-hat. Lilou & John wrote the text for “Salvini Pop” on a lunch break 2017. They started out with a “silly little rhyme that could come from an Italo Disco 80s track”. They intentionally made the lyrics in a naive style that could mimic a wannabe author trying to write an EDM text in a foreign tongue. The idea was to create an unholy mix of stupid pop music lyrics with the thought-provoking politician Matteo Salvini in an effort to show the dichotomy of the two. The strings and trumpets were added to remind of the classical composers of Italy. The song has since spread among primarily Lega voters in Italy but also throughout Europe and America.

Italia Italia I have a thing for you
Italia Italia what you gonna do?
See the Man is dancing, nobody can stop
Everybody’s dancing Salvini-vini pop “Godwin’s Law” was invented by American author Mike Godwin, stating that the longer an Internet discussion goes on, the higher is the probability that someone will make a reference to Adolf Hitler and the National Socialists in 1930s Germany. Lilou & John wrote the song after watching Netflix one evening, discovering a literal inflation of World War Two movies.

God is dead and death is hell and you are scared of all
Got no spine but lots of wine and man you’re gonna fall
You talk about what Hitler did oh yeah it was a dread
But seriously the man is gone and all his friends are dead
I have heard about that war for 40 years or so
Try another genocide oh baby let it go
I am sick of hearing you pretend you’re anti-war
While in fact all what you do is proving Godwin’s Law.

Yeah he killed a lot of people I don’t question that
But baby all the Indians huh they died of heart attack?
Who enslaved East Africa and still have slavery?
Who drop bombs on Bagdad to “defend democracy”?
It is for “the common good”, yeah that has worked before
Just own your crime and I’ll be fine and stop your fucking wars
And if you gotta virtue signal do it in your shed
Just get that fucking world war two obsession off your head “USS Donald Trump” is a song about the 45th president of the United States. They intentionally made the melody and vocal style remind of a US army drill. The song divided Lilou & John’s fanbase as many listeners had a hard time liking Donald Trump and some even asked why Lilou & John would show him “support” with a song, once again proving that the duo’s radical concept of making music beyond politics is still hard for many to grasp.